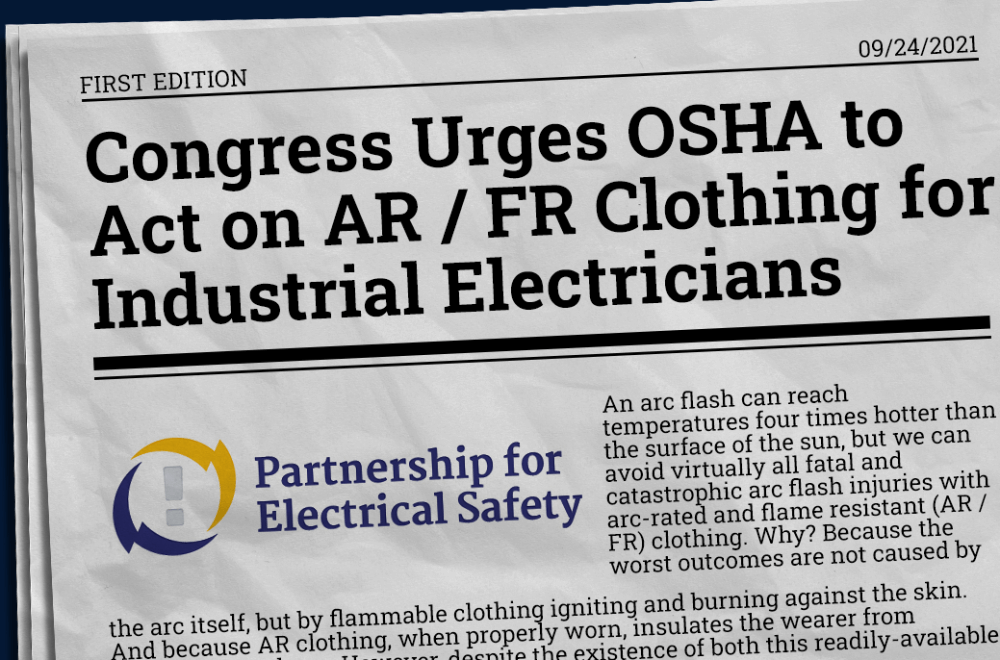 An arc flash can reach temperatures four times hotter than the surface of the sun, but we can avoid virtually all fatal and catastrophic arc flash injuries with arc-rated and flame resistant (AR / FR) clothing. Why? Because the worst outcomes are not caused by the arc itself, but by flammable clothing igniting and burning against the skin. And because AR clothing, when properly worn, insulates the wearer from second-degree burn. However, despite the existence of both this readily-available lifesaving technology and safety standards that have been in place for 20+ years, there are still 500,000+ industrial electrical workers who are not provided proper protection from this deadly hazard. In 2020, Tyndale became a founding member of the Partnership for Electrical Safety (PES), uniting with other industry leaders to advocate for these unprotected workers.

This group engages directly with the leadership at OSHA and key Congressional committees to raise awareness and call for the protection every industrial electrical worker deserves. Specifically, PES strongly believes that:

What has this group accomplished so far? Tune in to find out:

In just a short time, PES has achieved two significant steps toward its mission of ensuring each worker has equal protection from arc flash:

We remain hopeful that OSHA will act to address this critical issue and ensure that these workers are finally provided the arc flash PPE that they deserve.

Learn more about PES, monitor our progress, and get involved at https://partnershipforelectricalsafety.org/.