Summer Safety – Best Practices for Staying Safe in a Thunderstorm 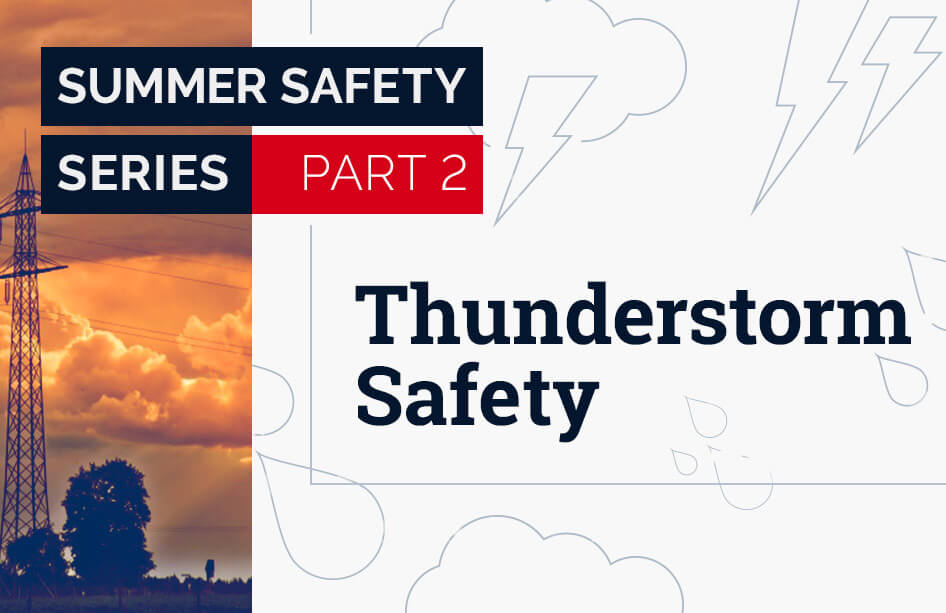 For those whose jobs require them to work outside – electric utility, oil and gas, and other industry workers – it’s not all “fun in the sun” during the summer months. Our summer safety blog series covers insect-repelling FR clothing and how to avoid heat stroke. In this post, we’re sharing some of the dangers of working outdoors during a thunderstorm and what you should do to stay safe during such storms.

While summer is typically characterized by clear skies and sunshine (at least in most regions of the US), chances are you’ve experienced a thunderstorm during the summer as well. These storms happen as temperatures increase because warm air near the Earth’s surface rises and will continue to rise as long as it’s warmer than the air around it. As it rises, it gradually cools, but there are scenarios when this natural cooling isn’t enough and the rising air remains warmer than the surrounding air in the atmosphere causing it to rise for miles, collecting water vapor and creating towering cumulonimbus clouds, capable of producing a thunderstorm.1

Don’t be fooled – just because the term “thunderstorm” only mentions thunder doesn’t mean it’s not dangerous. In fact, every thunderstorm includes lightning. Thunder is simply the sound caused by lightning’s impact on the air in the atmosphere. Lightning can cause serious injuries or even death and is especially hazardous to workers whose jobs involve working in open spaces, on or near tall objects, or near explosives or conductive materials (e.g. metal).2

If you or your employees work outside, especially in the circumstances listed above, you should take thunderstorm safety seriously. First, according to OSHA, thunderstorms should be recognized as an occupational hazard. Under the General Duty Clause, Section 5(a)(1) of the Occupational Safety and Health Act of 1970 (OSH Act), employers are required to provide their employees with a place of employment that “is free from recognizable hazards that are causing or likely to cause death or serious harm to employees.” This includes lightning hazards that can cause death or serious bodily harm.2

So what can you do to stay safe? Always remember this: “When thunder roars, go indoors!” The National Oceanic and Atmospheric Administration (NOAA) advises that nowhere outside is safe when thunderstorms are in your area.2 Even distant rumbles should alert you to get to a safe place immediately. Additionally, OSHA and NOAA offer the following best practices for employers and workers whose jobs require them to work outside:

If you want more information on thunderstorm safety, follow the links to resources below.

If rain – without the threat of lightning – is prevalent in your area, consider implementing an FR rainwear program. Tyndale is the largest stocking distributor of NASCO FR rainwear – which is Made in USA! – and a distributor of other leading lines by Lakeland, ML Kishigo, NSA, Tingley, and more. Contact your National Account Executive today to learn more.