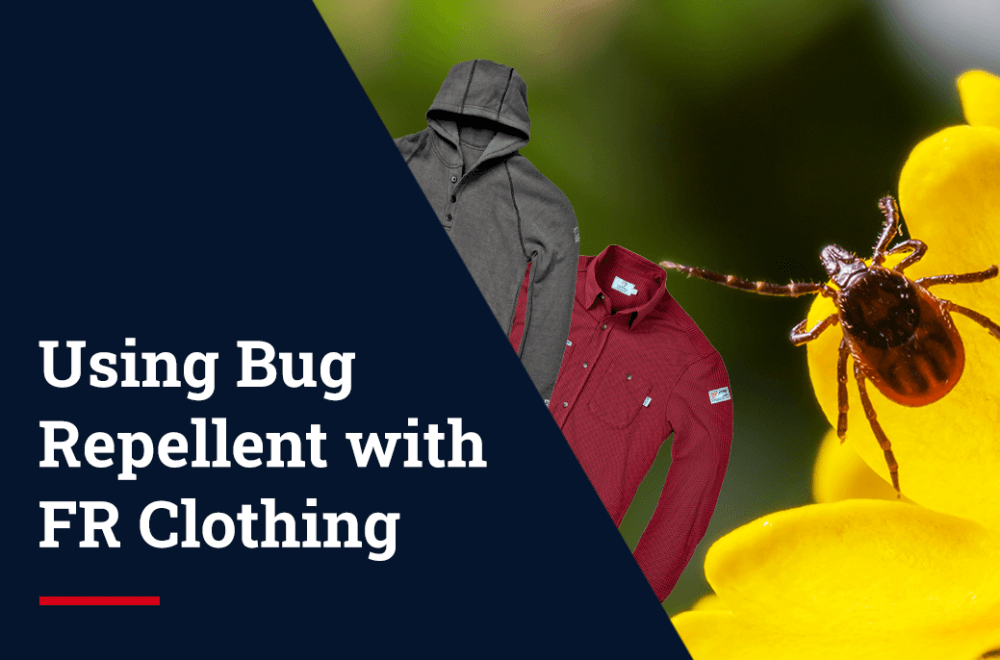 Can You Use Bug Spray on FR Clothing?

The Missoula Technology and Development Center was asked whether insect repellent containing DEET could affect flame resistant material (Nomex®) worn by wild land firefighters. The presence of West Nile Virus has increased the use of mosquito repellent, with most choosing to use products containing DEET. Garments were tested and performance in the FR test was determined by measuring char length and after-flame time. The samples were monitored for melting and dripping during the test. Garments sprayed with different concentration of DEET and permethrin were tested the same. After the DEET applications, all samples of the treated Nomex® materials failed the test. The application of permethrin to the materials did not cause them to fail the flame resistance test, nor did any flash flames occur. In addition, the material did not melt or drip.

Permethrin is a specially designed formula that bonds with fabric to provide protection for six weeks or longer and is non-flammable. Permethrin prevents the spread of Lyme disease, Rocky Mountain Spotted Fever, West Nile Virus, and other infectious diseases caused by insects. The active ingredient in permethrin kills ticks and mosquitoes that come in contact with treated clothing. Insect repellent for FR clothing is specifically formulated to provide up to six weeks of protection against biting insects without reducing the safety benefits and protection of FR clothing. Permethrin is tested safe per ASTM F1506, Electrical Arc and Flammability Test, and ASTM 1958F-1958M-05, Electrical Arc Exposure method using manikin F, Federal Test Method H191 method 5903, flame resistance of clothing and vertical burn (3).

What to Look For & Use

Look for insect repellent that:

It is important to note that permethrin is recommended for use on clothing only and not for use on skin. Permethrin is a neurotoxin and is regulated by the EPA (like other pesticides), so following safety precautions and instructions of use is very important. Permethrin does not repel insects but works as a contact insecticide, causing nervous system toxicity that leads to death or knockdown of the insect (2). The most important spots on clothing to spray are pant cuffs, pant waistbands, boots, socks, sleeve cuffs and collars. It is best to use a non-aerosol water-based permethrin spray on clothing for insect protection. To apply permethrin to clothing, spray each side of the fabric outdoors for 30-45 seconds, just enough to moisten it. Allow the garment to dry for 2-4 hours before wearing it (2). For garments that have been improperly sprayed with DEET or insect repellent with DEET, the DEET can be removed by following the manufacturer’s home laundering instructions. The DEET on the surface of the fabric masks the flame resistant properties of the fabric. When applying insect repellents to garments, a waterborne permethrin-based insect repellent has been shown in testing to not have an adverse effect on flame resistance (4).

To protect yourself from pesky bug bites and insect-transmitted diseases on the job, permethrin-treated clothing creates a formidable barrier against mosquito bites.